Blues Beatles started during the breaks of the rehearsals of Today – an original band that Marcos Viana, Flavio Naves, Lancaster Ferreira, Bruno Falcão and Fred Barley started in 2010. Marcos, the singer, would invariably pick up his acoustic guitar and start playing Beatles songs. The other members of the band were amazed at how natural the songs sounded, as if he had written them himself. The reason for this was that Marcos really identified with the songs and never imitated John or Paul. He simply sang with his own voice and from his heart.  Being blues players the rest of the band started adding their blues twist to these “break songs”. One day Lancaster said: “why don’t we mix these two things we love to play? We could call this Blues Beatles!  ”Everyone loved the idea and together they started the Blues Beatles in 2013.

The first version of the Beatles songs that caught people’s attention was Ticket To Ride. The video has now more than two million views on Facebook. The band has worked and reworked many different songs since it was formed, but only the ones that sound natural to their ears stay in the repertoire. Most of the vocal melodies are kept in their original form, but interpreted with Marcos Viana’s unique voice, in an unpretentious and heart-felt way.  The arrangements combine blues and soul grooves that suit the vocals of the songs while adding a different feel to them. Instrumental solos and improvisation, typical elements of the blues, are an integral part of the Blues Beatles style. Their fiery live performances showcase their individual and collective skills as soloists.

The personal and musical affinity between the members of the Blues Beatles is a very strong bond that makes them a band in the true sense of the word. Mutual admiration is the key element in their partnership. “We are big fans of one another and after every concert we always feel that we are lucky to have met each other. We are not better than anyone, we just love playing together”, says the whole band in unison.

The blues aspect of the band is deep-rooted. Lancaster, the guitar player of the Blues Beatles is a pioneer of the Chicago blues style in Brazil, with a thirty-year career and six CDs released since 1996. Flavio Naves has released two CDs, played as guest on many others and was the first blues musician to dedicate himself to mastering the Hammond B3 organ in Brazil. Fred Barley is one of the most renowned drummers in the country. His amazing technique and tasteful playing has influenced a legion of younger drummers. He is in constant demand as a session player in the studio and onstage. Bruno Falcão is the kind of bass player that can bring down a wall with his massive fat sound. A reference in the blues scene in Brazil, his walking bass lines defy the laws of physics: they are fluid and solid at the same time. He lays down the foundation and grooves that make the Blues Beatles sound powerful and contagious.

Blues Beatles released their debut CD, Get Back to The Blues recorded in 2016 at the Space Blues Studios in São Paulo, Brazil. To achieve the sound they were looking for they invited their favorite saxophone player Denilson “Big D” Martins to record several tracks. Later the band invited him to join them on tours.  In December 2016 they started divulging their videos internationally on Facebook and their instant success was overwhelming.  Their rendition of A Hard Day’s Night reached one million views in only one week. Be on the LOOKOUT for Blues Beatles coming to a town near you in Fall of 2017/Spring of 2018. 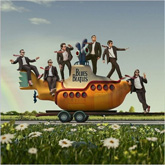 The Blue Note Grill was voted INDY's 2020 Best in the Triangle:

Thank you from the bottom of our hearts for your friendship and support! ~ Bill and Andrea Gay Whittington